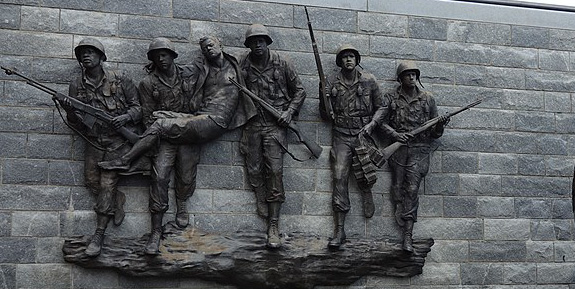 For these past 70 years, since 1951 in Korea, I have carried a 1000 Won Korean Banknote in my wallet with the signatures of all my squad members on the face of that banknote, our unit being Headquarters section, First Battalion, 31st Infantry Regiment of the 7th Infantry Division, when we were deployed on the far side of Lake Hwachon, and when squad members put their signatures on that bank note, given to me by a Korean worker assigned to our unit, Lee Bong Ha. He was a chief figurehead in his own right when he made a replacement crystal for a comrade’s broken watch crystal out of a plastic spoon, which was carried in many military papers under the title of “Time to Spoon.” Lee Bong Ha had been paid off from his government contract with a basketful of such banknotes, and passed them out like the near-useless paper that they were (some of them used for the most unlikely reasons you might think of.)

All my squad members signed the bank note on one day except Chuck Rumfola, who was on a special assignment, Now, to a man, they are all gone, Bob Breda of Chicago’s Northside being the last one to go, just a few years ago when I saw his obituary in a Chicago newspaper. Bob was the smallest of those squad members. I am, to this day, the lone survivor of signature signers. Chuck Rumfola had been the only squad member that did not sign the banknote that special day, as he was off on an unofficial assignment, which will be explained here a little later, as he and his daughter Carol and son-in-law Peter Konstraba, came to visit me here in Saugus a few years ago, signed the note, his signature now being in darkest ink. Chuck Rumfola went back home to Avon, NY and died two days later, his signature in place along with all our comrades.in the unit, sticking together to the very end,

I list them from memory, as acute as it can get when I think of them either individually or as a squad, which is every day in this life since:  Frank Butcher (Elston, Iowa) and Tom Durocko (Springfield, Illinois) thought they were not doing enough fixing radios as their prime assignments in a war where friends and comrades were dying around us, so the pair of them volunteered to transfer to an infantry company. They were killed in action a few days later.

Chuck stripped two rear wheel rims of their tires, sending one rim to the top of the mountain where he connected the two rims with a cable and sent supplies up the steep face of the mountain that would have taken many Korean laborers many hours to accomplish, by jacking up the back end of the truck and running the engine so the jacked-up wheels cold send supplies up the mountainside. All he had to do was run the engine of the rear-jacked-up truck to spin the wheels and cut multiple days of delivering arms and supplies up the steep side of the mountain. It was nothing more than the thinking of a handy man facing a hard day’s work, cutting down the labor and the times of delivery, the ease of delivery, the spontaneity of war/

It was the same day when Major Young Oak Kim, our battalion commander, (who since then has had a school named after him in California, a hero in two wars, the first as a member of the Nisei  battalion in WW II because they were not allowed to fight in the Pacific campaign for obvious reasons) was asked by a Marine radioman on a hilltop with us, if we could use a squadron of jet planes coming back from a visit north of us, still carrying a load of unspent ammunition, asking the major if he could use any of that arsenal. Major Kim told him to request the flight to strafe the other side of the mountain we had climbed, which they did with apparent ease, passing down over us so closely we swore we could feel the heat of their exhausts, After they had completed that run, the marine radio man said, “You know who that was! That was Ted Williams and his gang.”

Two years later, sitting in Fenway Park’s right field, that Korean Banknote still in my wallet, as it is today, with my best pal and teammate Ernie Anganis bedside me, I caught a Ted William’s home run ball, which four sons since then “borrowed” that ball occasionally to play catch in the back yard, Of course, at length, it ended up at the mercy of their baseball bats, a baseball lasting only so long in play, gone with the ages, but that banknote hanging in place for these 70 years

View all posts by literallystories2014

4 thoughts on “What’s in My Wallet? By Tom Sheehan”