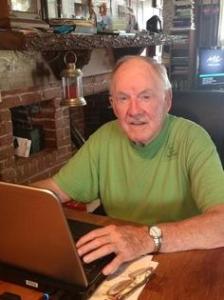 My father said it early and often to me: “We come into this life with two gifts, love and energy,” and it has never been truer as I have just stepped into my 94th year on the planet, still working at my first love, seeking the magic, the mystery, the mastery in words. My latest book was accepted a few weeks ago by Pocol Press, Beside the Broken Trail; and two reviews of a story published in the worldly Literally Stories magazine said of one of my stories on their site that morning, “Comes a Prisoner Bound in Rags;”.

To go along with those simple reviews and the matter of memory, I fully believe the memories of the old days are keener than more recent days, as events prove. With a sort of distinct catch, I remember my team’s games at the old Manning Bowl in Lynn; two games against Lynn Classical) in 1945 and 1946 (1 and 1), one against Lynn English, two against Peabody, one against Swampscott. There were others that scatter in the quick search.

These days Manning Bowl memories keep leaping to the fore, and the names and faces and accomplishments keep coming back in a litany of images. Their names beget actions, the images in constant motion: Rocco Cerrone and Tony Andreottola from Revere; Clayton

Sheehan and Joe Penney and Rick Ricciardelli and Ruby Jules and Marty Smith and Jack Hennessey and Charlie Long (who later worked in my crew at Raytheon) from Lynn English; George Comiskey and Billy Ransom and Bob Debner and Al Ghouzi from Beverly; Pat Arena and Joe Palazola and Mooter Albert and Ted Williams and another Destino from Gloucester; the intrepid phalanx from Peabody of Herky Harris, Buddy Roche, Dick Keone, Pete Kravchuk, Luke McHugh, Art Adamopolous and tackle tandem Berger and Pelletier, the ones we scrimmaged against so many times I can’t remember; and Harry Agganis and Don Miosky and Ray McClorey and George Pike and Vic Pujo and Dave Warden and Nils Strom and Stanley Brittan and Mecca Simirowski and Boley Dancewicz from Lynn Classical.

And there was Jimmy Vizarkas, of Lynn Classical, who a few years later I spotted walking down the Main Supply Route (MSR) in Korea as his outfit was relieving mine on Heartbreak Ridge or some such site and did not see him again until Founders Day in Saugus in 2002. That day on the MSR we talked about Manning Bowl and our last encounter there in 1945.

There was a smiling quarterback named Rodriguez from Classical and an Air Force team at Fort Devens in 1950 when he and I and Art Spinney, then with the Baltimore Colts and later to protect Johnny Unitas in that great 1958 win over the New York Giants, rehashed our days at The Bowl after our military game, just before we headed off to other destinies.

Oh, one wonders how such names might spur the legends of old memories, how they fall out from the site of the old Bowl, floating in the air as I drive by, caught up in reverie and nostalgia. Time does have its good swaps of fortune.

John Burns, a high school teacher just back from his war in 1945, found my deep love of words and the attachable mysteries. So it was, at the beginning of this century, that we brought hundreds of Saugonians tightly together to create and publish 2000 copies each of two books, A Gathering of Memories, and Of Time and the River, sold all copies and established a scholarship at Saugus High School in John Burns’ memory.

It was a joy of joy to work with John, Bob Wentworth and Neil Howland on those two issues.

Those memories linger, but others have a way of forcing entry, declaring their importance, stating their claims; tightly remain the near unforgettable, the precious elements held in the deepest cells of memory.

I remember my mother and my Aunt Bess thumbing up the Pike, U.S. Route One, to a night game versus Newburyport in 1944 (knowing if they got there, they’d be sure of a ride home.) I thought that they were too old then for such tomfoolery, yet it was the 7th game of the undefeated year and the first time we were scored upon, much thanks to teammates Art Spinney (later with the Baltimore Colts and a Fort Devens team with me in 1950, on our way to Korea), Killer Bob Kane, and the likes of Frank Pyszko, toughest teammate of them all to this day.

Memory, as I’ve said, falters lately, though the old stuff hangs on.

The love and energy doesn’t let go, not if you hold onto it, even in these latest years, like it’s a possession you can’t release: it’s bonded to your soul, every now and then flashing back at you for all it’s worth. Some folks, for sure, know the feeling; some, the poor lot, never feel it.

Being in my 94th year, of course, has some drawbacks, but at this machine, and with the love and energy refusing to let go, holding on for dear life, every last damned minute of it, there’s room for getting done.

The newest story, finished this morning, has already been sent on to an editor, at his desk, waiting, hopefully to be knocked wide awake. I keep trying for that wake-up call; it’s worth the wait.

My biographical note, as requested or often demanded by publishers, says, at this moment in my 94th year: “Sheehan has published 52 books, has multiple works in Rosebud, Linnet’s Wings, Serving House Journal, Literally Stories, Copperfield Review, Literary Orphans, Indiana Voices Journal, Frontier Tales, Western Online Magazine, Faith-Hope and Fiction, Provo Canyon Review, Eastlit, Rope & Wire Magazine, The Literary Yard, Green Silk Journal, Fiction on the Web, The Path, etc. He has 32 Pushcart nominations, 5 Best of the Net nominations (one winner). latter book publications include Swan River Daisy by KY Stories, From the Quickening by Pocol Press, The Cowboys by Pocol Press, and Jehrico by Danse Macabre. Back Home in Saugus (a collection) is being considered, as is Elements & Accessories (poetry), and Valor’s Commission (a collection of war and post-war tales reflecting the impact of PTSD). He was 2016 Writer-in-Residence at Danse Macabre in Las Vegas. He served in 31st Infantry, Korea, 1951-52, graduated from Boston College in 1956, and worked at Raytheon Company for 30+ years until his retirement in 1991.

I don’t make any money at these efforts, love of words continuing to drive me on, the magic or sometimes mastery, the desires that are indefatigable, endless, full of possibilities: nothing tried is nothing printed, the dormant words cry for escape; I’m at their command.

Another stunning piece by Tom

Get off My Back, Saugus by Tom Sheehan

Swan River Daisy
River Water Larceny
Driving on the Sausage Run
Farenheit,Electricity and a Flexible Flyer
The Mount Carmel Raid
Last Call For a Loner
John and Andrew, Philanthropists
Long-Haul Driver
Evan Stalworth’s Wealth of Words
Notes Pinned on a Returnable Container
The Chocolate Kid
Skink, the Town Drunk
Letter to the Lost
Michael and the Final Fix
Decisions on the Ipswich River
Code Blue
The Craterville Catastrophe
The Tale of Trot and Dim Johnny
The Catch of the Day
Last Look
Plumbeck the Fiddler
Reflections Aft
Comet With a Nasty Tale
Silas Tully, Mechanized
Knickers On The Loose
Beau Geste Murtaugh, Veteran of Wars
Eddie Smiledge, Houseman
Meeting Max Cargo
The Recovery
The Boy Who Dug Worms at Mussel Flats
The Back Side of Sight
Leaving for Viviers
The Hermit of Breakheart Woods
The Lobster That Wouldn’t Sleep
A Soldier’s Crusade
The Innocence of a Lakeside Interruption
Death in the Shadows
Comes a Prisoner Bound in Rags
ecnalubmA
Retaliations Soft Reply
The Boatyard Gang
Two Characters Caught up in Shantytown
Gunter Garth
Chapter Reaching for a Novel Part 1
Chapter Reaching for a Novel Part 2
Braelin Cordelis
From One War to Another without Choice
At a Loss for Words