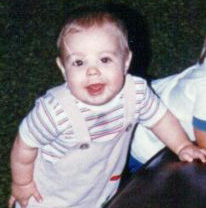 Templeton Moss (who has changed very slightly since this photo was taken) was born at an early age and named after one of the guys from The A-Team. No, not Mr. T. One of the other guys. He began writing after seeing Shakespeare In Love because he thought it would help him get girls. By the time he realized it would not, he found he wasn’t really good at anything else, so he decided to keep at it. Two of his plays (The Workshop, Scrambled Eggs) were produced at the University of Kentucky and lately  he has been self-publishing his stories and poems for kids of all ages (except 83 1/2). He lists his hobbies as “pizza, napping and cartoons” and gives his hometown as “Disneyland.”

Pair O’ Dons    Story removed at the request of the author