Born in St.Petersburg, Russia, Victor is still a resident of that city, though when he was born at about the time that Yuri Gagarin first orbited the earth, the city was called Leningrad. On completion of his compulsory military service, Victor joined the city’s police force as, what is called in England, a ‘beat bobby’.  After five years of close encounters with the less than salubrious inhabitants of said city, he decided that it was time to move on and enrolled at the second most famous university in Russia to study law, graduating in 1990. This brought promotion and a move into the investigation of criminal cases within the force.

Eventually, Victor decided that he wanted a change entirely and resigned to take up the bar.  And that is what he does today.  The great advantage of his current occupation is that he is able to plan his workload, and so schedule in  plenty of time to pursue what is really important to him.  That is both writing stories and mastering the English language.  He believes that he could be thought of as a literary anglophile, and dreams to be published more than once for you to read, enjoy and comment. 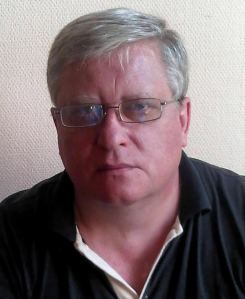 One thought on “Bort, Victor”